Twitter Threads: Is This Social Media Trend The End of Blogging?

Too often we don’t see change until it’s already happened. If you had polled a thousand marketers a few years ago and asked the following questions, you wouldn’t have gotten a lot of “Yes” responses:

Looking back now, the fact that all of those things happened seems like the logical course of events. But very few people got out ahead of them and most of us are still playing catch up.

So, what other change is happening around us that we are too sure of ourselves to notice? Here’s one:

Anyone else notice how prominent the Thread has become on Twitter? (Also called a Tweetstorm, if you’re one of those people who fully embraces the technological degradation of our language.)

It’s everywhere. Like any tactic, some are using it to sketchy ends like spreading misinformation. But plenty of professors, political scientists, entrepreneurs, developers, and journalists, among others, are regularly using Threads to tweet out bite-sized but connected content that, when read one after another, reads a lot like…a blog post. This begs the question, is this the end of the blog post as we know it?

Because identifying change is only valuable if you can predict what the effects of that change will be, here is our theory: the increasing prevalence of Twitter Threads is going to cannibalize enough of the blogging world that blogging is going to become a less effective tactic for SEO.

Here are some parameters for this future digital marketing hellscape:

First, the Tweet Thread won’t reduce the importance that Google and other search engines place on fresh, authoritative content on your website. People are going to just stop reading it.

We’ve seen this happen repeatedly as new platforms come online or develop new features. There’s nothing preventing you from looking up photos on Tumblr instead of Pinterest, from posting your own photos to Flickr instead of Instagram, from reading news on the Boston Globe’s website instead of on Facebook or listing your resume and publications on a website instead of LinkedIn. People just don’t do those things anymore, so if you want anyone to look at what you’re posting online, you’ll need to post it where the attention is.

We’re not going so far to say anything will change in the way Google ranks content on search results pages (we are, after all, writing a blog post about the death of blogging for SEO marketing value). But if most brands compare the delta of their blog traffic from now versus a few years ago to their social followings now versus a few years ago, we bet they’ll be able to validate our hunch on this one. Here’s a highly scientific model of those trends: 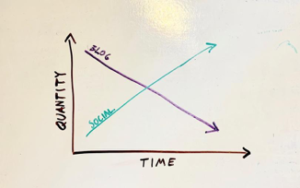 The user behavior of going to a blog to read information is going to be replaced with the impulse to go to Twitter for a thread.

What are the indicators that will tell us when this starts happening?

Second, the US will not be the leader in this shift. It will come from the developing world.

According to Hootsuite, 80% of Twitter’s user are from outside of the United States. Twitter is embracing this international growth with Twitter Lite, which is data friendly and geared towards the 2 billion people around the world whose smartphones are their only connection to the internet. The low barrier of entry inherent in posting a Thread on Twitter, compared to blogging on a website, points to quick adoption in places less internet-literate than the United States.

From a consumption perspective, Threads, if they catch on, could spread rapidly in places where social media platforms play an extremely prominent role in people’s digital experience. Currently West Africa and Oceania are places “where many Facebook users don’t know the app is on the internet, or have no idea there is an internet beyond Facebook.” (Yes, we linked to a Twitter thread. But so did the New York Times.) Quartz has a detailed article on these misconceptions also.

No, you aren’t going to see Twitter Threads (Threading?) everywhere the same way blogging took off in its heyday.

The content landscape is different than it was when blogging had its heyday. Social platforms in general have matured from syndication outlets to become content hosting environments themselves. In fact, the idea that Twitter threads will eat away at blogging is just a continuation of this general trend. Therefore, it’s a struggle within an ever-shrinking corner of the internet.

Twitter is not seeing the same growth as the other platforms in its cohort. While more people use the platform daily than ever before, monthly user growth waxes and wanes and overall growth for 2019 is predicted to be only 1%. One way to look at this is: the people already using the app are using it more than ever before, but Twitter isn’t bringing in new users. Various competing channels (IG Stories and Live, YouTube channels, newsletters, etc.) are still taking more and more of the online content pie every year.

Brands will be bad at it, and it will drive most brands further away from peer status on social media.

Various factors such as platform changes, privacy concerns and the shift to messaging, and the rise of influencers and brand ambassadors that speak on behalf of brands, have driven brands further from the peer status they enjoyed with their consumers early on social media.

But one of the biggest factors ushering most brands back up to interrupter status online is the growing level of difficulty in sharing the same types of content as their consumers. It’s harder and harder for a brand to blend in on your feeds as aesthetics have shifted away from the light-hearted community feeling and curated authenticity of early- and mid-stage social media towards the detached, meme-driven irony of Gen-Y content. Twitter threads are just another arrow in the content quiver that brands will have a hard time emulating.

You’ll have to pay for it.

As Facebook leads the privacy and group-focused Social 2.0, expect to see your favorite tweeters go private and use Patreon or other means to get a subscription fee out of you.

That’s enough crystal ball gazing for now. Check back in 2 years and see if we were right.